As my compatriot Kitty Weldon pointed out in a blog post earlier this week, the success or failure of an IoT project isn’t something you stumble on a year or two after rolling out a solution. A recent Global Data Technology IoT Enterprise Survey of more than 1,000 IoT buyers showed that failure happens very early on during the investigation phase of a given deployment and more often than not centers on the cost and complexity of the project at hand.

Similarly, in re-rolling out its own IoT platform solution this week, Cisco cited some internal research that echoes those concerns, placing the blame for IoT abandonments squarely on the shoulders of integration complexities and a lack of internal expertise.

I think both sets of findings are true, though Cisco’s study emphasizes post-deployment failures. Regardless, for me, they both emphasize an important point: IoT could use a little democratization. Just as we’ve seen in other industries such as enterprise software development, which is leaning toward citizen developers, and enterprise data and analytics, where business users are doing self-service analytics, the power is with (or should at least be with) the people. But, where within the IoT lifecycle would this distribution of power take place? Let’s unpack Cisco’s marketing message surrounding its forthcoming Cisco IoT Operations Platform to see. According to Cisco’s Rowan Trollope, over the coming months, Cisco will roll out a platform built on three pillars:

Such goals are definitely in keeping with Cisco’s historical domains of expertise (e.g., networking), which means the company stands a good chance in delivering on its promises, especially as Cisco’s platform will build on its 2016 acquisition of IoT cloud platform provider Jasper. That’s the first pillar. The second will rely on the company’s extensive R&D surrounding what it terms ‘fog computing,’ or analysis at the edge. This is already a proven commodity and deserves more attention within the marketplace. (I refer you to SAS and Cisco’s recent joint work efforts using Cisco 829 routers for more on that.)

Our own research shows the importance of ‘foggy computing.’ In the same GlobalData study mentioned above, when we asked customers where they wanted to process and analyze IoT data, a resounding majority of respondents chose to do so on or near the device itself. 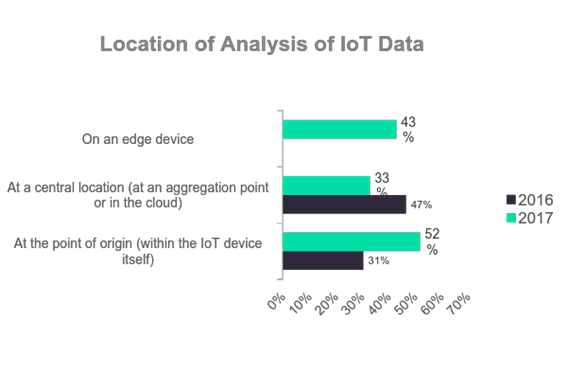 That’s all well and good, but what about that third pillar where Cisco delivers actionable IoT data to the business? I think that’s where the rubber meets the road for enterprise buyers and for Cisco itself. In essence, the third pillar is the answer to the question: why do we want to process and disseminate IoT data? The answer is, unfortunately, quite complicated and often involves some heavy consultative lifting.

My money’s on the vendor that can operationalize those first two pillars within the context of business. It’s not enough to drop data at the doorstep of an analytics product. It’s not enough to pass customers on to a professional services group or systems integration firm. And let’s forget about reference architectures, which do nothing more than prove the potential efficacy of a given hypothesis. What’s needed is for IoT platform vendors to take a specific IoT problem such as fleet management and turn that into a readily consumable, outcome-based IoT service accessible to business users themselves.