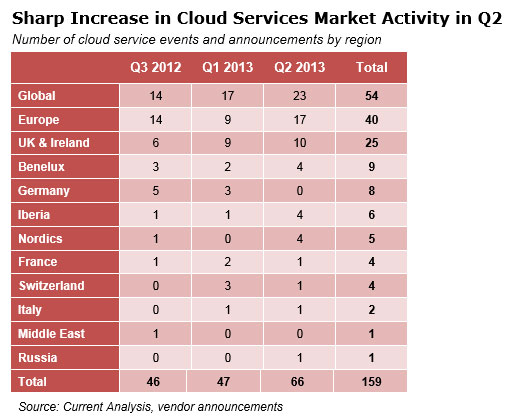 During the last three months, the number of cloud services-related announcements increased almost by half compared to the previous two quarters.  In Q2 2013, 66 announcements in total were tracked in our database, with events having a global or pan-European impact representing about two-thirds of that figure.  This contrasts with the previous two periods, when country and region-specific events accounted for almost half of the reported activity.  This trend reflects the expansion of existing services into new regions and an increase in activity from larger players capable of marketing services to a larger geographic footprint.

At the country and regional level, the UK continues to outpace the rest of Europe, although the total was perhaps unfairly inflated in Q2 by multiple service providers announcing their participation in the government’s G-Cloud iii cloud service procurement program.  Activity is also on the rise in Iberia and the Nordics region over the course of the last three months, while France, Italy, Eastern Europe and the Middle East barely show up on the radar (considering the relative size of their markets).

While there is undoubtedly some regional bias in these numbers based on the PR culture of various countries and service providers, these supply-side figures almost certainly align broadly with cloud adoption rates among enterprise IT departments in each region.  The message is clear: Northern Europe (and Spain) is where cloud service supply (and presumably demand) is most highly concentrated within the diverse EMEA market landscape.

In terms of types of activity coming from service providers in Europe, IaaS has come on strong in recent months as a wide range of service providers in the region roll out new (or expanded) public, private, and hybrid cloud offerings.  In June, another five solutions from Capgemini, Colt, Datapipe, IS Group, and NTT Com were launched or enhanced, joining an increasingly crowded market.  From October 2012 to May 2013, there were no PaaS solutions launched by the 60+ service providers tracked, but in June, Rackspace and Savvis both brought out new PaaS offerings.  Both, interestingly, were driven by third-party acquisition or partnership.

Outside of core services, there has also been a strong rate of investment and deployment of new cloud infrastructure and cloud-based security services, both of which we expect to stimulate increased adoption.  Every month, as if on cue, another service provider data center build (or two) is completed, driven by demand from the cloud.  Service providers report that enterprise deployments are moving from small-scale pilots and cost-saving exercises to strategic transformations and business-critical workloads.  With complexity and vendor lock-in still valid concerns and lingering barriers to adoption, enterprises are seeking open solutions that simplify delivery, leaning on partners and service providers to supplement internal knowledge gaps.  To that end, we expect to see more activity in cloud partnerships and professional services during the rest of 2013 as service providers back up their core services with value-added solutions.

What are you seeing in terms of adoption, within your organization and among your peers?  Are service providers delivering the right solutions for your current needs?